Eddie & The Lizard Man is the first book in the “Curious World of Eddie Billings” book series. In this first installment we are introduced to Eddie Billings, a lonely young man obsessed with conspiracy theories who believes his boss Kevin Kennedy is a Reptilian or “Lizard Man” planning something evil for the inhabitants of the small town of Linemell. Fueled with a desire to know the truth, Eddie sets out to prove his theory by following Kevin to a mysterious meetup where things get even stranger than Eddie could have anticipated. Is Eddie right about Kevin? If he is, what is a Reptilian doing in the small town of Linemell? Is any of this connected to Eddie’s puzzling past? Enter the “Curious World of Eddie Billings” to find out!

Stay updated on new stories from The Curious World

The Curious World of Eddie Billings

Where things are rarely as they seem

Eddie is convinced that a ruthless and cunningly deceptive reptilian race of aliens has invaded earth and is out to destroy it’s inhabitants. The threat comes even closer to home when Eddie suspects his boss Kevin Kennedy to be one of these slithering imposters.

“But why would a Lizard Man be in the small mountain town of Linemell where Eddie lives?”

This question and many others like it cause Eddie to launch his own investigation of his boss and other peculiar happenings that are becoming more and more frequent in Linemell. Does awkward Eddie have the detective chops to uncover the truth behind the reptilian conspiracy before it’s too late? Enter “The Curious World of Eddie Billings” to find out!

My favorite part was the Lizard man!

Really liked the twist at the end.

This story was so much fun to follow along. Younger readers will absolutely love the main character and his wild imagination. They will also love the mystery surrounding the boss who definitely comes across as the bad guy of the story. Like all good mysteries, there is some sleuthing involved in which Eddie winds up in a tough spot. I LOVED that the narrator broke in and spoke directly to the reader from time to time. This is an element that I will never get sick of seeing when it’s done in a way that keeps things interesting! My favorite example from this book is when the narrator breaks in to explain that Dog is a friend not a pet, and that Dog and Eddie have a type of communication that only they can understand. The narrator mentions that they do not have the ability to understand Dog’s accent as, “it’s simply too strong.” And, “Therefore, I cannot offer an accurate translation.” This had me cracking up! While this one has been categorized as middle grade, I would recommend it for readers at the tail end of that age group/reading comfort level as the vocabulary here doesn’t shy away from using words that may need to be looked up. For example; countenance, compounded, bolstered, bravado, congenial, apprehension, domineering, inquisitively, vexed, and others. That being said, I think this is wonderful as the reader can also learn while enjoying a great mystery! This is an all round wonderful read! I saw on Goodreads that this is tagged as book one. If you have a middle grade reader in your home, this is definitely a book/series to keep an eye on! 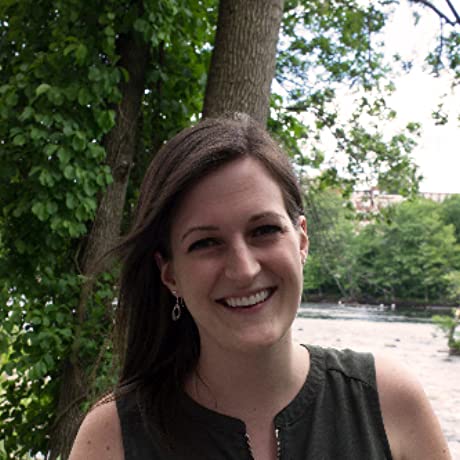 Erica RobynGoodreads.com
The novel itself is a very easy, enjoyable read. It has short, snappy sentences that makes it very easy for someone with ADD, ADHD, ME or similar, to enjoy the story. There are no unusually big words anywhere in the text, so it would be at an appropriate level for most ages. It takes about an hour to finish the novel if you read at a moderate speed, and it is neatly decorated with little drawings to create visual stimuli too. This makes it a lot easier for someone who struggles with focusing to actually feel a sense of accomplishment by being able to finish a book in one day. The Liners have created a curious little universe, and I am very excited to see what kind of adventures they will take Eddie Billings on in the future. There is a lot of potential for interesting stories, not only regarding Eddie and his boss. Although it is aimed towards a younger audience, I'm sure that anyone would be able to at least being left with a positive first impression while reading through this story. I would definitely recommend it for its target demographic. 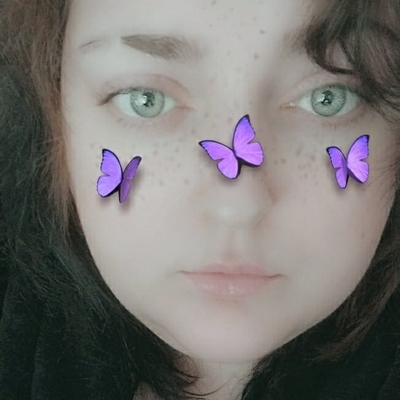 (artwork in the book is Black and White, not in color)

Eddie finds a snake like shedding of skin.
Eddie enters the very long dark hallway that leads to Kevin's office.
Eddie overhears a suspicious conversation between Kevin and an unknown caller.
Kevin catches Eddie snooping around outside his office.
The radio Eddie uses to listen to Mann's Conspiracies.
Eddie spies on Kevin as he exits the antique shop holding two burgundy suitcases.
Eddie stands outside the menacing backstage door of Wet Willies.
Eddie is pinned to the wall by the Giant Man.

I remember how intimidating reading was for me when I was in middle school. Many of my friends had no problem getting through thick books like “Lord of the Rings” while I struggled with books like “The Box Car Children.” I wanted to read more grown-up books but they were just too long and scary. That’s why when we set out to write “The Curious World of Eddie Billings” series, we did so with the reluctant reader in mind. Here’s how we accomplished that:

What we didn’t do was dumb things down. I love stories with lots of layers where every time you read it you discover something new about a character or the plot. So, although the format of the series is fairly low-stakes for a reluctant reader, the overarching storyline is high-stakes, with the very existence of humanity hanging in the balance.
– Stefan Liner
Co-Author / The Curious World of Eddie Billings 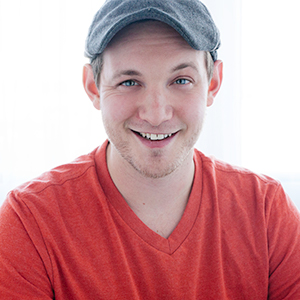 Stefan is the oldest of six children and was homeschooled through all 12 grades. Although he initially struggled with learning to read during his middle school years, it was during high school that he caught the writing bug and has been telling stories in one way or another ever since. Because of his early struggles with learning to read; when he and Robin began collaborating on The Curious World of Eddie Billings series, Stefan knew he wanted it to be a series that reluctant readers would enjoy. 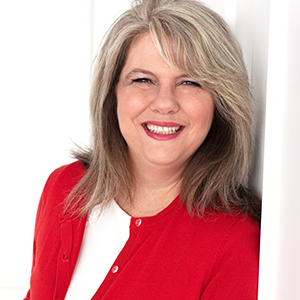 Robin Liner is a homeschool mother of six, author, screenwriter, filmmaker and artist, who live in the Appalachian Mountains of North Carolina. Having taught several children with learning differences, it isn’t surprising she teamed up with her son, Stefan, to write books that appeal, not only to avid readers, but to reluctant readers as well. With Eddie & The Lizard Man, the writing team combines smart witty storytelling with clipped sentences and short chapters that is certain to engage all types of readers. When she isn’t writing she is usually drinking coffee and painting.

Schedule an interview with one or both
of the Authors for your...

Schedule an interview
for your...

Katie R.

North Carolina
Read More
My favorite part was the Lizard man!
Conner L.Tennessee
Read More
I really liked the voice of the narrator!
Tristan B.Nebraska
Read More
Can't wait for the next one. So good!
Previous
Next

You can help us create more great stories by becoming a patron. Click the link below to find out how.

Sign-up for the Liner House newsletter to stay up to date on new projects. 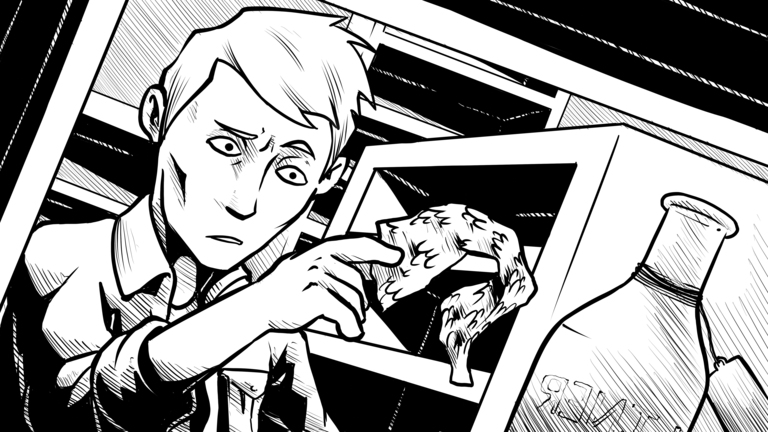 In the center of the small town of Linemell, a place shrouded with its own curious secrets, crept a quaint road named Main Street. On one side of the street were family-owned shops and restaurants, and on the other side stood a towering, old brick building that dated back to the time of the great pioneer, Daniel Boone. In fact, one of the town’s proudest moments was the night Daniel Boone slept in Minnie Ponder’s spare bedroom in that very building.

Now, if you’ve never been in one, there is something wonderfully mysterious about an antique shop. They are filled with fascinating items like old dressers with secret compartments and shelves stacked with leather-bound books and clocks and vases.

But who is Eddie Billings? Well, one could say Eddie was an awkward sort of guy of average height with light brown hair and inquisitive blue eyes. That he usually dressed in mismatched clothes found at a thrift store or that he didn’t have many friends or get out enough. And all of those things might be true.

However, the most important things to know about Eddie Billings are that he was an overly-curious conspiracy theorist, junk food enthusiast, tinkerer and, in this particular moment, a disinterested antique store clerk, who was dusting off a porcelain angel figurine when his eye caught a clock sitting on top of an old bookcase – it read 2:50 p.m. He thought to himself…

Now, Eddie’s shift began at 1:00 p.m. and ended at 3:00 p.m. Monday through Friday. His main responsibilities were to assist customers, arrange inventory, and keep the place clean, which was what he was occupied with at the moment… Well, that – and counting down the minutes to 3:00 p.m.

You see, Eddie didn’t mind arranging inventory or keeping things clean. He could do that all day long and be quite content. It was assisting customers that made Eddie anxious. That’s why a “good shift” to Eddie was a shift that didn’t involve assisting customers or even seeing a customer. So far, today’s shift had been a good one.

So with only ten minutes left on the clock, Eddie remained pessimistically optimistic that this shift could actually end up being one of the rare and cherished “good ones.”

As Eddie continued cleaning various items arranged on various counter-tops, shelves, and display cases, he heard a faint, dissonant whirring sound coming from the back of the dimly-lit antique store. Intrigued, he slowly peeked his head around the corner of a large wooden dresser. He looked toward the dark hall that led to the back office where his boss, Kevin, worked behind closed doors.

As Eddie peered down the ominous hall, suspicion surrounding the strange noise began to fill his mind.

“What is that, a fan? No, it can’t be. The pitch changes too much. A radio? No, there’s not any static. Maybe it’s some sort of communication device…”

Then Eddie had an epiphany… 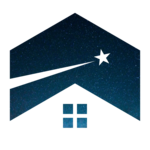 Sign-up to stay updated on
new stuff from Liner House